ECTS is the European Credit Transfer and Accumulation System which is a standard for comparing the study attainment and performance of students of a higher education.

Following the Bologna Declaration, Megatrend University has adopted the ECTS for all levels of study, in order to facilitate student mobility at international level and to provide transparency and recognition of its study programs. The aims of ECTS are to facilitate student mobility at international level; to ensure the transparency that would provide higher education institutions with additional information about student performance; to ensure that periods of study abroad are recognized in the students’ home country; and to provide model rules of application based on the transparency of the study programs and the success of the students to regulate academic recognition.

European Credit Transfer and Accumulation System is based on the principle of transparency of learning, teaching and assessment process. Its objective is to facilitate planning, delivery, and evaluation of study programs and student mobility by recognizing learning achievements and qualifications and periods of learning. The Course Catalogue includes information on ECTS credits allocated to different courses.

According to Serbian Law on Higher Education. Academic credit system in Serbia and at Megatrend University is as follows:

A: a minimum of 60 ECTS credits, where a total of 240 ECTS credits have been previously earned during the undergraduate/bachelor academic studies.

B: a minimum of 120 ECTS credits, where a total of 180 ECTS credits have been previously earned during the undergraduate/bachelor academic studies.

The methodology used at Megatrend University to allocate credits to different course units is defined by Serbian Law on Higher Education and approved by Commission of Accreditation and Quality Assurance.

Each course within a study program or short program is assigned a corresponding number of ECTS credits, while the scope of the study is expressed by aggregate ECTS credits.

A total of 60 ECTS credits corresponds to an average total input of a student of a 40-hour work week during an academic year. Overall activities of a student include active teaching courses (lectures, exercises, seminars, etc.), autonomous work, preliminary exams (colloquia), exams, writing final papers, voluntary work in a local community and other forms of involvement.

Voluntary work means work of a student without remuneration, organized by a higher education institution on projects of significance to the local community, which is evaluated within the system of higher education.

The academic year at the Megatrend University is divided into a Winter and a Summer semester. Each semester consists of 15 weeks of teaching and of exam periods defined by academic calendar adopted for each academic year. Methods of assessment are based on written and oral examinations, coursework and assignments.

The grading system used in Serbian higher education system is as follows: 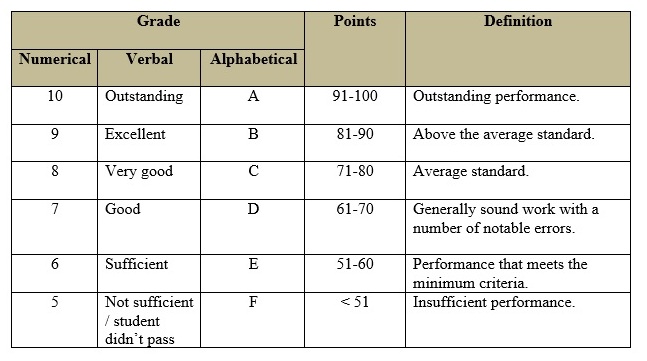 ***Higher education institutions may also use other systems for assessing if they are comparable to those mentioned above.